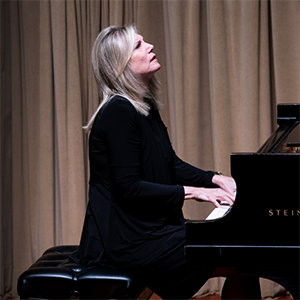 The Children of Willesden Lane 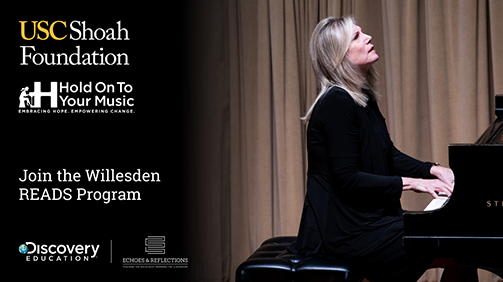 The Maltz Museum of Jewish Heritage, in partnership with USC Shoah Foundation, proudly presents The Children of Willesden Lane, the critically acclaimed one-woman theatrical performance by concert pianist Mona Golabek. The show is based on Golabek’s book ( of the same name) and recounts the story of her mother’s survival, resilience and triumph during World War II.

Mona Golabek is the daughter of Lisa Jura. Lisa was a child piano prodigy born in Vienna, Austria, who came to England as a refugee in 1938 as part of the Kindertransport rescue operation. Mona’s father, Michel Golabek, was a French resistance fighter, who received the Croix de Guerre. Mona’s grandparents died at Auschwitz.

Mona, deeply inspired by her mother’s story and the last words her mother heard at the train station, “Hold on to your music….it will be your best friend” became a concert pianist and has performed with major conductors and orchestras worldwide. The Grammy nominee and prolific recording artist has traveled the globe sharing her mother’s story.

Please join us for two unique programs with Mona.

On Sunday, November 7th at 7pm, join us at the Maltz Performing Arts Center for an in-person performance featuring Mona Golabek.

And on Monday, November 8th at 11am, local classrooms can join 10,000 students from the Cleveland Metropolitan School District and the Diocese of Cleveland for a special event, the Willesden READ. In this virtual event, classrooms can join us over Zoom to watch the performance and hear Mona share her mother’s story, live from the Maltz Museum of Jewish Heritage.

Mona’s foundation, Hold On To Your Music, is now working in partnership with USC Shoah Foundation, the leading educators in Holocaust education, to bring Mona’s mission to life through The Willesden Project. The Willesden Project offers a unique constellation of educational elements—rooted in testimony, technology, and music—to open students’ hearts and minds, and expand the ways in which they learn about the history of the Holocaust and related themes. Special recognition to our local sponsors for making this program possible: The Cleveland Foundation, Roe Green, Sally and Bob Gries, Norma Lerner, Tamar and Milton Maltz, David and Inez Myers Foundation, The Albert B. and Audrey G. Ratner Family Foundation, George F, Stephanie M, & George L. Traub Fund of the Jewish Federation of Cleveland.