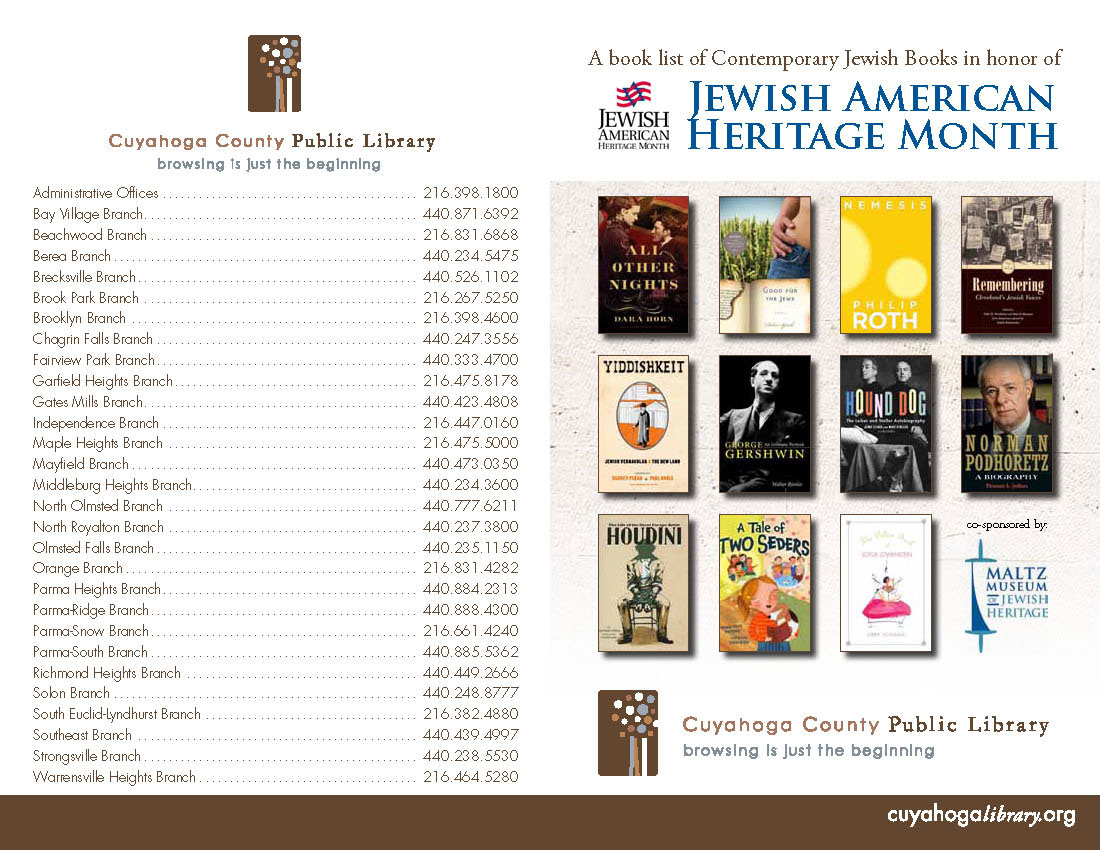 All Other Nights by Dara Horn

Passover seder is forever changed when a Jewish soldier in the Union army is ordered to murder his traitorous uncle.

Immerse yourself in Pearlman’s world of engaging characters and sublime language.

Good for the Jews by Debra Spark

Inspired by the Book of Esther, Spark’s funny and insightful characters must negotiate family, bureaucracy and anti-Semitism in Madison, Wisconsin.

Home in the Morning by Mary Glickman

A young man raised in the Old South struggles with his desire to support the Civil Rights Movement while protecting his family.

Roth is at his historical best with this story of fear and desire during a polio epidemic in 1944.

From the 17th century to the present, this broad overview of the evolution of Orthodoxy in America examines how Jews have coped with the challenges of religious freedom.

Save the Deli by David Sax

You’ll find yourself hungry for pastrami sandwiches, matzoh ball soup and gribenes (chicken skin fried in chicken fat) as Sax describes the history of the Jewish delicatessen and why so many are finding it difficult to remain open.

In the last completed work before his death in 2010, Pekar presents the world of Yiddish language and culture through biographical sketches, real-life and fictional stories, prose pieces and a documentary play on Yiddish theater.

Backing Into Forward: A Memoir by Jules Feiffer

The award-winning cartoonist, playwright and author delivers a witty, illustrated rendition of his life, from his childhood as a wimpy kid in the Bronx to his legendary career in the arts.

Fresh sources, including newly discovered letters by lover and fellow composer Kay Swift, enhance this biography focusing on Gershwin’s rising career from 1925 to his death.

Hank Greenberg: The Hero Who Didn’t Want to Be One

In 1934, Greenberg risked his chance to beat Babe Ruth’s home run record by sitting out a game on Yom Kippur. The author profiles the slugger’s legend: his boyhood, his discipline and complexity, and the virulent anti-Semitism he confronted throughout his career.

by Jerry Leiber and Mike Stoller with David Ritz

A dual portrait of the music team that shaped rock-and-roll music in the 1950s and 1960s describes their humble origins, their relationships with such performers as Elvis Presley and the Coasters, and their record-setting collaborative achievements.

Best known as Jackson Pollock’s wife, Krasner was a firebrand and trailblazer for women’s rights who is finally now being recognized as one of the 20th century’s modernist masters.

Longtime editor of the influential magazine Commentary, intellectual Podhoretz was the voice of the neoconservative movement, bringing controversy to the political and cultural debate of his time.

A Secret Gift: How One Man’s Kindness – and a Trove of Letters – Revealed the Hidden History of the Great Depression by Ted Gup

The author’s grandfather, Sam Stone, placed an ad in the Canton, Ohio, newspaper shortly before Christmas in 1933, offering cash gifts to 75 families in need. Gup investigates letters responding to these ads, and learns about his grandfather’s hidden past as well as the suffering and triumphs of strangers during the Great Depression.

The Snowy Day and the Art of Ezra Jack Keats by Claudia J. Nahson

In 1962, The Snowy Day introduced Peter, the first African-American protagonist in a full-color children’s book. Featuring 75 illustrations along with essays focusing on Keats’ Jewish background, civil rights advocacy and art, this volume is an apt tribute to this influential author.

Acclaimed filmmaker David Grubin explores 350 years of Jewish American history, focusing on the tension between identity and assimilation. Further exploration of the topic, including video clips and educator resources, can be found at the PBS website: www.pbs.org/jewishamericans/jewish_life/index.html

This biographical documentary of Gertrude Berg and her radio and television serials The Goldbergs includes Berg’s guest appearances with Edward R. Murrow, Ed Sullivan and Steve Allen and interviews with such well-known fans as Supreme Court Justice Ruth Bader Ginsburg and Norman Lear.

The website of JAHM, the nonprofit charity that sponsors Jewish American Heritage Month, includes events, history and stories from all 50 states. www.jewishamericanheritagemonth.us/about_us.aspx

This national website highlights the month with videos, educational resources and events. www.jewishheritagemonth.gov/index.html

Houdini: The Life of the Great Escape Artist

Fascinated by magic as a young boy, Hungarian immigrant Ehrich Weiss journeyed to America in the early 1900s and evolved from a small-time vaudeville player to the most daring, death-defying escape artist ever!

Born to Dutch immigrants in 1845 in Brooklyn, New York, Lipman (Lip) Pike led a fascinating career as the first Jewish professional baseball player who became famous for leading the league in home runs!

A Tale of Two Seders by Mindy Avra Portnay, illus. by Valerie Cis

A young girl with divorced parents describes how she observes Passover in two separate households, culminating in a temple celebration with her blended family.

Lights Out Shabbat by Sarene Shulimson, illus. by Jeff Ebbeler

A precocious young boy revels in a special Shabbat weekend with his Bubbie and Zayde as he experiences a rare Georgia snowfall where the lights go out.

Sixteen-year-old Zoe Diamond feels bored to death in sleepy, suburban 1973 Connecticut and uninterested in being Jewish until she comes in contact with a young Israeli teacher, Rivka Levi, who provokes her to make a difference like the tragic heroine Hannah Senesh.

Half Jewish, half Chinese and growing up in Los Angeles, Chloe has always followed her heart to seek her destiny. Rather than set her goal on a traditional college, she is determined to make a splash in fashion and schemes to attend an elite design academy in London.

The Pillow Book of Lotus Lowenstein by Libby Schmais

Using the format of a diary, quirky Lotus Lowenstein, who is obsessed with all thing French, dreams about going to Paris. Living in Brooklyn, she satisfies her passion by organizing a French club at her high school, where she meets a boy named Jean!

The Blood Lie: A Novel by Shirley Reva Vernick

Based on a true story, experience what it was like to be Jewish in a small upstate New York town in 1928. When a 4-year-old girl mysteriously disappears, prejudice surfaces as Jack and his family are accused of killing her for a blood sacrifice.