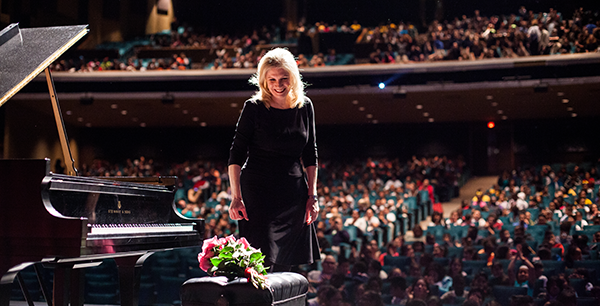 The Maltz Museum of Jewish Heritage, in partnership with USC Shoah Foundation, proudly presents The Children of Willesden Lane, the critically acclaimed one-woman theatrical performance by concert pianist Mona Golabek. The show is based on Golabek’s book (of the same name) and recounts the story of her mother’s survival, resilience, and triumph during World War II.

Free and open to the public, The Children of Willesden Lane will be held on Sunday, November 7, 2021, 7:00pm, at the Maltz Performing Arts Center located at 1855 Ansel Road in Cleveland, Ohio. Advance online registration is requested. Face coverings required. Click here for Sunday’s link.

Mona Golabek is the daughter of Lisa Jura. Lisa was a child piano prodigy born in Vienna, Austria, who came to England as a refugee in 1938 as part of the Kindertransport rescue operation. Mona’s father, Michel Golabek, was a French resistance fighter, who received the Croix de Guerre. Mona’s grandparents died at Auschwitz.

Mona, deeply inspired by her mother’s story and the last words her mother heard at the train station, “Hold on to your music….it will be your best friend” became a concert pianist and has performed with major conductors and orchestras worldwide. The Grammy nominee and prolific recording artist has traveled the globe sharing her mother’s story.

Mona will share her story again during a second virtual performance exclusively for schools. Educators can register for this free 50-minute program that offers students the opportunity to watch the performance and interact with Mona. This free program known as The Willesden READS program will be held on Monday, November 8, 2021, at 11:00am. Click here for Monday’s link.

Stories of Survival: Object. Image. Memory., a landmark exhibit that showcases more than 60 never-before-seen personal items brought to America by Survivors of the Holocaust and genocide, will be on view October 27, 2021, through February 27, 2022, at the Maltz Museum of Jewish Heritage located at 2929 Richmond Road in Beachwood, Ohio. For more information including hours and ticket prices, call 216-593-0575 or visit www.maltzmuseum.org.