In honor of Jewish American Heritage Month, we are celebrating the stories of three Jewish American activists everyone should know. If you’ve been to the Maltz Museum of Jewish Heritage, their names may sound familiar because each story has a Cleveland connection and can be found in our core gallery, An American Story. Let’s get started on this virtual storytelling tour.

In the late 1800s and early 1900s, over 2 million Eastern European Jews fleeing religious persecution and searching for economic opportunity immigrated to the United States, settling in populous hubs like New York, Philadelphia, and Baltimore. Other new immigrants made their way across the country and established themselves in cities like Cleveland. Here, they “clustered in districts close to downtowns, joined the working class, spoke Yiddish, and built strong networks of cultural, spiritual, voluntary, and social organizations,” writes the Library of Congress in their digital exhibit, Haven to Home. In An American Story, we are introduced to Jewish men and women working tirelessly to build a life for themselves and a city where everyone thrives. 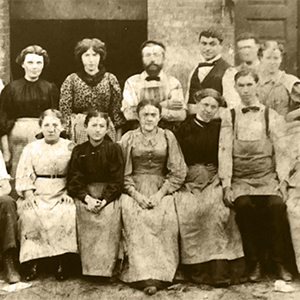 In 1890, Rose Pastor, a Jewish immigrant from Poland, took a job to help support her destitute family. She earned 77 cents a week rolling cigars 10 hours a day in a Flats loft. She was just eleven years old. Pastor spent her childhood in Cleveland’s sweatshops, educating herself when she could find time to read. After moving to New York, she met and married an elite wealthy socialist named James Phelps Stokes.

Their marriage became a media sensation, calling her “Cinderella of the Sweatshops” notes the Jewish Women’s Archive (JWA). The disparity in the couple’s background was “a central — and divisive – issue in the course of their marriage as well as… the issue of religion” but to the public their love was “a living fairytale… an example of the classic American success story.”

After twelve years of working long hours in the sweatshops, Pastor was able to use her newfound marital status to become the voice of the worker. As JWA writes, “Her distinctive position made her particularly successful in this cause, for her working-class background gave her argument a personal legitimacy, while her upper-class position protected her from arrest.” However, Pastor was an outspoken opponent of World War I, and a speech in which she criticized American “war profiteering” eventually lead to her arrest, causing additional strain on her marriage and ultimate divorce, but her commitment to political causes never wavered.

Devoted to radical activism, Rose Pastor’s life ended amid emotional and financial strain, demanding no stipend for herself from a millionaire ex-husband and living exclusively off of income from her own writing. She died after being diagnosed with a malignant breast tumor “which she attributed to having received a blow on the breast from a policeman’s club during a demonstration—claiming martyrdom for the proletarian cause,” notes JWA.

Pastor, with her complicated identity, is often remembered for her sensationalized marriage rather than her political activism, but we think this Jewish feminist deserves her own place in history.

To learn more about this one-time Clevelander’s legacy, check out the biography, “Rebel Cinderella” by Adam Hochschild which is described as “the astonishing but forgotten story of an immigrant sweatshop worker who married an heir to a great American fortune and became one of the most charismatic radical leaders of her time.” 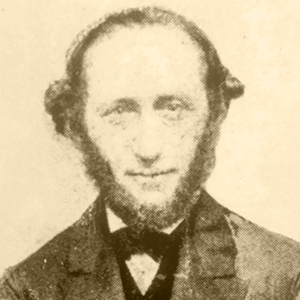 Born in Prussia, now Poland, reform rabbi and writer Isador Kalisch was well known for his 1842 German patriotic poem “Battle Song of the Germans,” later popularized as a song. But, his real notoriety began when he immigrated to America and helped found Cleveland’s Tifereth Israel congregation, a thriving temple to this day.

In 1855, Cleveland hosted the first conference of rabbis. It was there that Kalisch was invited to participate in editing the important reform movement document entitled, Minhag America, a siddur that would become a common prayer book for synagogues across the country. The gathering of reform rabbis would also soon become formalized as the Central Conference of American Rabbis (https://www.ccarnet.org/), which according to their website is, “the oldest and largest rabbinic organization in North America” and is “creating a compelling and accessible Judaism for today and the future.” Past Cleveland presidents include activists such as Rabbi Abba Hillel Silver (1945-1947), Rabbi Arthur J. Lelyveld (1975-1977), and Rabbi Richard A. Block (2013-2015).

Advocacy is central to the reform movement writes Rabbi Marla Feldman for the Union of Reform Judaism, “The passion for social justice is reflected in the ancient words of our prophets and sages and in the declarations of our Movement’s leaders throughout its history. The ancient command ‘Tzedek, Tzedek Tirdof! Justice, justice shall you seek!’ constantly reverberates in our ears. It has become deeply embedded in the Reform Jewish psyche. This charge has led to a long and proud tradition of political activism by the Reform Movement.”

Those early leaders in the reform movement, include none other than Kalisch whose passion for justice and Judaism invigorated him in 1861 to protest a law specifying that only ordained Christian ministers could serve as military chaplains, even though thousands of Jews were already in the Union army. With other rabbis, Kalisch led the petition to convince President Lincoln to propose a new law that permitted Jewish army chaplains. Congress adopted the measure soon after.

Today, the Union of Reform Judaism continues to carry forward Kalisch’s support for Jewish military chaplains and Jewish military personnel and their families, passing a resolution in 1950 and again in 2005, noting “As Reform Jews we must connect with the Jewish servicemen and women and their families for we are their community, just as they are ours. ‘All Jews are responsible for one another’ (Babylonian Talmud, Sh’vuot 39a).”

To learn more about Jewish life in the military, visit the National Museum of American Jewish Military History that explains, “Using President Roosevelt’s taxonomy of Spirit, Conviction, and Purpose, the exhibition addresses the following questions… Why do people serve in the American armed forces? When and in what contexts – did they serve? How did they serve? Although the exhibition focuses on the service of Jewish men and women throughout the history of the United States, the subtext of the entire space is the universality of military service. ”

Thank you to all servicemen and women who risk their lives so the rest of us may live freely. 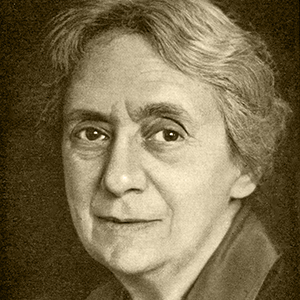 Born in 1860 to Hungarian Rabbi Benjamin Szold who immigrated to the United States in 1859, Henrietta Szold grew up witnessing her father’s leadership of Baltimore congregation, Temple Oheb Shalom. My Jewish Learning writes that her father taught her “German, Hebrew, and the Jewish sacred texts to supplement her public school education.” Meanwhile, the family aided Russian Jews fleeing pogroms, helping them settle as newcomers in America. These early experiences would guide Henrietta’s ideology as a pioneer of the Zionist movement and her interests to help Jews worldwide as the founder of Hadassah, a women’s organization to improve healthcare in Israel.

“In 1909 Szold visited Palestine and became intensely involved in the work to reconstruct the Jewish homeland. At the age of 49 she had discovered her vocation. She devoted the rest of her life to Palestine — the promised land,” continues My Jewish Learning. Noting that she had quite a vocation prior as well, as the only woman chosen to be on the Jewish Publication Society, she “became executive secretary of the publications committee and, for over two decades, was instrumental in the editing, translating, and publication of some of the most important works in American Judaism.” Let’s not forget either that she was the first woman to be accepted to the Jewish Theological Society. Her accomplishments were many, and each was a stepping stone to her path of creating one of the largest Jewish organizations in the United States.

“Today, Hadassah remains committed to Jewish continuity and building a better world through medicine and healthcare, advocacy, and communities of women,” according to the Hadassah website Also noting that “not long before her death, when a sculptor was creating a bust of Henrietta Szold, she asked him to ‘make my eyes look to the future.”

Although Henrietta Szold passed away in 1945, her legacy lives on and connects to people all over the world, including right here in Northeast Ohio. After Israel’s victory in the June 1967 Six-Day War, Lynn Gottlieb of Lorain, Ohio joined other student volunteers assigned to clean up Hebrew University’s original Mt. Scopus campus, where access had been denied to Jews since 1948. Told to discard all old papers she found, she nonetheless salvaged a few treasures, including this 1935 card from Henrietta Szold to Dr. Judah Magnes, the university’s first chancellor.

To learn more about the life-saving work of Hadassah and the difference one person can make in changing the world, please watch this video on the inspiration of Henrietta Szold from The Spielberg Jewish Film Archive Note: this video is in Hebrew.