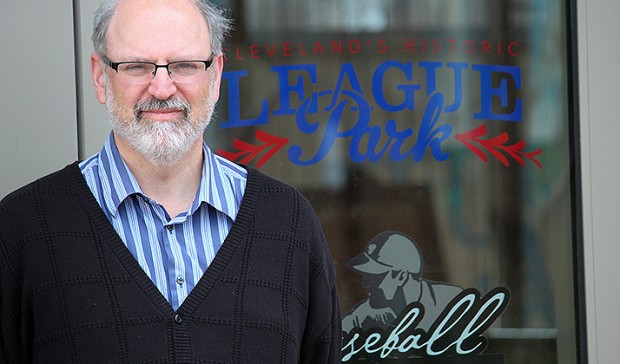 Morris Eckhouse is excited about Chasing Dreams: Baseball & Becoming American coming to the Maltz Museum this summer (April 12 – September 7, 2015). He sees Chasing Dreams as a perfect fit for a region with such a rich baseball legacy. “Cleveland has a history of diversity in baseball and a diversity of baseball,” says Eckhouse. “This is a community that is most definitely part of the bigger baseball story.”

Eckhouse should know. A baseball historian with an almost encyclopedic knowledge of the sport, he is also Administrator for the Baseball Heritage Museum. The Baseball Heritage Museum loaned a few of its artifacts to the Maltz Museum for this installation of the exhibition organized by the National Museum of American Jewish History in Philadelphia. We recently took a tour of the museum. It’s housed inside the former ticket booth of the recently restored League Park (see the photos here). During the visit we talked to Eckhouse about Northeast Ohio baseball history.

Why is it exciting for the Baseball Heritage Museum to be located right at League Park?
The combination of the Baseball Heritage Museum at League Park is exciting because we are actually on the grounds where so much baseball history has taken place.  The Baseball Heritage Museum focuses on diversity in baseball so to be able to look out and see where Louis Sockalexis played for the Cleveland Spiders, where the Cleveland Indians won the 1920 World Series, where the Cleveland Buckeyes played as the Negro League World Series winners of 1945, where barnstorming games featuring the likes of Satchel Paige and Dizzy Dean took place, where Joe DiMaggio hit in his 56th straight game in 1941, and here Cy Young, Bob Feller and Mel Harder pitched is very special for us and our visitors.

What is League Park’s legacy, do you think?
The legacy of League Park is special because it continues. While most of the other classic Major League Baseball sites have been built over for other purposes, League Park has been re-purposed for baseball. It represents a continuum of baseball history, and Cleveland history, dating back to 1891. It connects generations and, with the interpretive function of the Baseball Heritage Museum, tells a story not only of baseball history, but also Cleveland history and American history.

Cleveland’s strength as a baseball town also includes the nearby minor league teams such as the Lake County Captains and the Akron RubberDucks, the college programs at universities like Baldwin Wallace, Case Western Reserve and John Carroll, and all the high school and youth baseball in the city and the suburbs. And Cleveland is a baseball town well beyond the playing field. The Baseball Heritage Museum and League Park are important baseball destinations locally and nationally. Cleveland Public Library is a trove of baseball information with the foundation of its Mears and Murdock collections. Lake View Cemetery is an important baseball destination as the final resting place of Ray Chapman. The restored Municipal Stadium Chief Wahoo sign is lit and on display at the Western Reserve Historical Society. Cleveland’s Osborn Engineering Company set the standard in engineering most of the classic Major League Baseball parks including League Park, Yankee Stadium and Fenway Park.  And, Cleveland State University, when it was Fenn College, was arguably the birthplace of scholarly baseball research where Professor Harold Seymour and Dorothy Seymour worked on what became the first doctorate on baseball history (awarded at Cornell University) and the baseball history trilogy: Baseball: The Early Years, Baseball: The Golden Years, and Baseball: The People’s Game.

Not going to the Indians’ home opener on Friday, April 10? Consider paying a visit to the League Park for its day-long celebration.