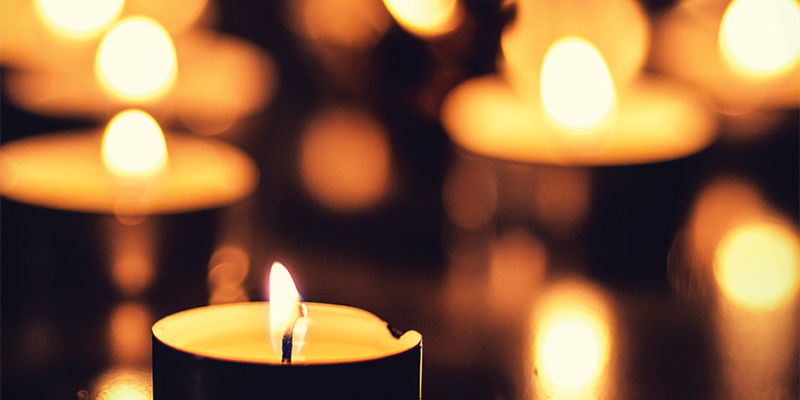 On the evening of April 27, people across the country and around the world will begin to honor victims of one of the most violent periods in 20th century history, the Holocaust.

Holocaust Remembrance Day, or as it’s known in Hebrew, Yom HaShoah, is not only a time of mourning, but also at time to bear witness. What does it mean to bear witness? According to Merriam-Webster dictionary to bear witness is “to show that something exists or is true” or more formally “to make a statement that someone saw or knows something.”

In the next twenty-four hours, there will be many statements of recognition, as first, second and third generation survivors attest that the Holocaust happened. We will stand up and speak out for the 11 million innocent people who fell victim to the Nazi regime’s state-sponsored mass murder, a number that includes the pre-meditated and calculated killings of 1.5 million children and 6 million Jews, in addition to Catholics, Roma Gypsies, Afro-Germans, homosexuals, and the disabled, among others.

We believe education is activism. When we share one story from the past with one person in the present, that person becomes armed with information that combats Holocaust denial and promotes acceptance and inclusion for the future. Be part of the solution to end antisemitism.

1. Gather with the Community for Yom HaShoah V’Hagvurah, a commemoration of the Holocaust and heroism

This annual event, presented by Jewish Federation of Cleveland and Kol Israel, features Manli Ho, daughter of Chinese diplomat, Feng-Shan Ho, who issued visas to thousands of Jews who escaped to Shanghai during the Holocaust. Hear the story of an upstander who helped change people’s lives, and the world.

2. Experience the Interactive Biography of Holocaust Survivor, Stanley Bernath now on view at the Maltz Museum of Jewish Heritage

Every Sunday, Wednesday, and Friday at 2pm; included with regular admission; free for members

What happens when the last Holocaust survivor is no longer with us? Who will tell their stories? The Maltz Museum has partnered with the USC Shoah Foundation to preserve Holocaust memories through cutting-edge technology. Stanley Bernath, a local Holocaust survivor, whose story has been memorialized as an interactive biography spoke to thousands of students and adults about his experience as a Holocaust survivor passing away at the age of 92. Through this innovative and interactive tool, he continues to tell his story and audiences continue to ask questions and hear his answers in real time, in our theater.

3. Understand how the Holocaust Could Happen by Watching these Online Programs

Studying the Holocaust raises more questions than answers. We continue to seek knowledge from this tragic event to help us navigate the present and secure a better future. This year, the Maltz Museum partnered with Holocaust & Humanity Center in Cincinnati, and the Ohio Council on Holocaust and Genocide Education to launch a four-part monthly series exploring the factors that led to the rise of Nazism, and how the Nazi government used propaganda and legal precedents to exclude Jews from Germany and begin down the path towards the extermination of Jews in the Holocaust. Tune in to watch this recording anytime.

Part One: How Was it Possible?

Holocaust survivors Erika Gold and Helen Marks have spent decades bravely telling their harrowing stories of survival to students and adults alike, reliving horrific and painful memories in order to share truths of human history with the next generation. On Yom HaShoah, Holocaust Remembrance Day, join Sarah Weiss, CEO of Holocaust and Humanity Center in Cincinnati, as she interviews these two fascinating and fearless women, in a program from last year. Tune in to watch this recording anytime.

5. Learn how Countries Around the World have Responded to the Holocaust with Travel Writer, Irene Shaland

International author and travel writer, Irene Shaland, embarks on a global exploration of the Holocaust in a three-part series entitled, Global Response to the Holocaust, with a different focus area during each program. Tune in to watch these recordings anytime.

The Islands and the Boot: Cuba, Calabria/Italy, Malta, Corsica

This Times of Israel article has some important facts and figures about the lack of Holocaust education in the United States and abroad, plus looks at the real issue of survivors entering the last phase of their lives. But Facebook is working on recording their memories while they are still with us, by inviting celebrities to interview survivors, and then share those stories on the famous social platform.

7. Study History through Documentaries about Upstanders during the Holocaust

Even in the darkest of times there are stories of light. The Holocaust is one of the darkest periods of human history, and yet there are incredible acts of bravery and courage that remind us of the good in people. Check out a few of our favorite documentaries that remind us to always believe in the strength of the human spirit to find a way forward.

Besa: The Promise is the remarkable story of the Muslim men and women of Albania who saved the lives of nearly 2,000 Jews during World War II. Their stories are told through the prism of two men, one an Albanian Muslim, the other an American Jew, and the different, but equally remarkable journeys, that each must undertake.

Irena Sendler: In the Name of their Mothers tells the true story of a secret network of Polish women who rescued thousands of Jewish children from the Warsaw ghetto and hid them until the end of the war. In 1943 the Gestapo captured Sendler, tortured her and sentenced her to death, but she refused to divulge anything about the women or the hidden children. She escaped on the day she was to be executed when the Polish Resistance bribed a German guard. All of the 2500 children rescued by her conspiracy survived the war and many were re-united with their Jewish families. But for decades, they could not tell their stories. The new Communist regime in Poland silenced former members of the Polish Resistance and most of Sendler’s liaisons were persecuted or exiled. Over 65 years later they can finally speak about their wartime work as the once hidden Jewish children return to Warsaw to re-unite with their Polish protectors.

No. 4 Street of Our Lady tells the remarkable, yet little-known, story of Francisca Halamajowa, a Polish-Catholic woman who rescued 16 of her Jewish neighbors during the Holocaust, while cleverly passing herself off as a Nazi sympathizer. On the eve of World War II, more than 6,000 Jews lived in Sokal, (a small town in Eastern Poland, now part of Ukraine). By the end of the war, only about 30 had survived, most of them rescued by Halamajowa. The film draws on excerpts from a diary kept by one of the survivors, Moshe Maltz (whose granddaughter is one of the filmmakers). It also incorporates testimonies from other Jews saved by Halamajowa, her descendants and formers neighbors, as they reconnect on a trip back to Sokal.

The Cleveland Jewish News posted an article letting readers everywhere know that students in Cleveland are thinking about how technology can support Holocaust remembrance. The article explains, “The 2022 version of the app, which has been developed by Anshe Chesed Fairmount Temple religious school student and Solon High School student Easton Singer with project management by Fairmount Temple teacher Susan Ringel, was fully redeveloped with new programming.”

9. Tune in for with Israel’s Live Broadcast of Holocaust Remembrance Day Opening Ceremony with English Translation

We invite you to join us for a live broadcast of the 2022 Holocaust Remembrance Day (Yom Hashoah) Opening Ceremony. The central state ceremony, marking the start of Holocaust Martyrs’ and Heroes’ Remembrance Day, will be held at Yad Vashem on Wednesday night, April 27th at 8 PM Israel time (1 PM EDT). The ceremony will be held in the presence of the President of the State of Israel and the Prime Minister, dignitaries and Holocaust survivors. The Ceremony will be broadcast live with simultaneous translation into English, French, Spanish, German, Hebrew, Russian and Arabic. The live feed will also be accessible via Facebook in English and Hebrew.

10. Read Aloud the Names List of Victims of the Holocaust

On Your Own or With a Group

This list contains the names of 5,000 Jewish and non-Jewish individuals who were murdered by Nazi Germany and its collaborators between 1939 and 1945. Each name is followed by the victim’s country of origin or place of death.

Unfortunately, there is no single list of those known to have perished during the Holocaust. The list provided here is a very small sample of names taken from archival documents at the United States Holocaust Memorial Museum.

Approximately 650 names can be read in an hour.

To learn more about the Holocaust, register for one our Lessons of the Holocaust museum tours. Contact us at tours@maltzmuseum.org