Celebrating Pride Month with a Jewish LGBTQ+ Story Everyone Should Know

June is Pride Month, when people around the world celebrate the struggles and triumphs of the LGBTQ+ community. CNN explains in an article entitled, It’s Pride Month, here’s what you need to know, “Pride gatherings are rooted in the arduous history of minority groups who have struggled for decades to overcome prejudice and be accepted for who they are.” Join us as we wave our rainbow flag in support of equality, acceptance, and inclusion while honoring an early Jewish LGBTQ+ upstander and remembering the thousands of people tortured and killed by the Nazis because of their sexual identity.

June is when we celebrate Pride Month because June is when the Stonewall Riots occurred as spontaneous, violent demonstrations by members of the gay community in response to police at the Stonewall Inn in the Greenwich Village neighborhood of Manhattan. This uprising is widely considered the start of the gay rights movement. The movement had begun decades earlier at the initiative of courageous advocates such as Dr. Magnus Hirschfeld (1868-1935). 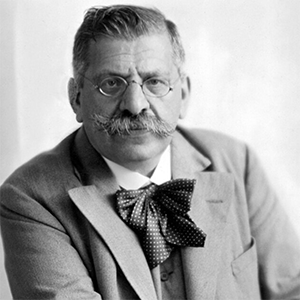 Who was Dr. Mangnus Hirschfeld?

A Jewish-German pioneer of the gay rights movement, Hirschfeld was first struck by the way a medical professor paraded a naked gay man through a classroom expecting the students to view the man as sick. This experience, as well as other traumas, became the foundation for Hirschfeld’s fight to challenge laws that labeled homosexuality a crime, and spurred his effort to create safe spaces in which anyone with questions about sex or sexuality could seek support. Ultimately he would receive global attention for opening the first sexology institute in the world, the Institute of Sexual Science, in the late 1800s.

An article in The Huffington Post explains the institute’s significance: “As well as its research role, the Institute promoted sex education, contraception, marriage guidance counseling, advice for gay and transgender people, the treatment and prevention of sexually transmitted diseases, gay law reform and women’s rights. It saw over 20,000 people a year.” Hirschfeld was a trailblazer in the struggle for homosexual emancipation: as the article notes, “A similar movement did not emerge in Britain until the 1960s, over half a century later.”

Was Hirschfeld persecuted by Nazis?

Hirschfeld’s advocacy and outspokenness came at an expense. As he challenged Nazi homophobia in pre-Holocaust Germany, he also became the target of extreme persecution and was injured in a severe attack. Fleeing to New York, where he was promoted as “The Einstein of Sex,” Hirschfeld met with other advocates, studied lifestyles, and gave lectures.

NYC Historic LGBT Sites Project explains, “During his six-week trip to New York City in 1930, Hirschfeld stayed in a room on the 40th floor of the recently opened Hotel New Yorker, which was one of the largest and most technically advanced hotels in the world. When asked why he wanted to stay in the Art Deco-style skyscraper hotel, which was a new building type at the time, he stated, ‘Because towers reaching to heaven seem to me the very symbol of the America I love and of her high aspirations.”

Meanwhile, in March 1933, a man named Kurt Hiller who like Hirschfeld was a German-Jew and gay rights activist and worked as the institution’s main organizer, was taken by the Nazis and sent to a concentration camp. Following this was an attack on the institute itself: “On the night of May 10, Hitler Youth and right-wing students in 34 university towns across Germany marched in torchlight parades ‘against the un-German spirit’… Then, singing songs and taking ‘fire oaths’ as band music played, in large open-air bonfires, the students burned thousands of ‘un-German books,’ taken in raids on public and university libraries, private collections, and bookstores. The events also received widespread media attention – not only newspaper coverage, but also ‘live’ radio broadcasts of the songs and speeches,” describes Back2Stonewall.com in an article on gay history and the destruction of Hirschfeld’s institute. “The seemingly ‘spontaneous’ demonstrations in Berlin were actually carefully orchestrated by Nazi leader Josef Goebbels, the Minister for Public Enlightenment and Propaganda, as part of the Nazi policy of Gleichschaltung (synchronization), which sought to align all elements of German society, polity, and culture with Nazi ideology by purging them of Jews and those considered ‘politically suspect’ and by defining their work as ‘degenerate.’ 40,000 people gathered in the square at the State Opera to hear Josef Goebbels deliver a fiery address: ‘No to decadence and moral corruption!’ Goebbels enjoined the crowd. ‘Yes to decency and morality in family and state! I consign to the flames the writings of Heinrich Mann, Ernst Gläser, Erich Kästner.”

These were names of authors who had used their pens to speak out against the Nazi regime, and their writings were destroyed. Among the books burned in the fire were the extensive collections and library research of the institute.

What happened after the institute and books were destroyed?

A high-ranking gay Nazi official named Ernst Rohm was initially protected by Hitler, but as the Nazi’s anti-gay propaganda increased and Rohm’s friends were disappearing, Hitler started to see Rohm as a threat to his power and the future of the Aryan race. In 1934, Rohm was murdered and his homosexuality used as justification.

Then, a division was created to compile lists of gay individuals. According to Wikipedia’s entry, Persecution of Homosexuals in Nazi Germany, “More than one million gay Germans were targeted, of whom at least 100,000 were arrested and 50,000 were serving prison terms as ‘convicted homosexuals.'”

The anti-gay law that Hirschfeld advocated to change earlier in his career was known as Paragraph 175. This is also the name of a highly-regarded documentary featuring the few living prisoners of Mauthausen, the concentration camp where thousands of homosexuals were sent to be tortured and killed.

Time Magazine’s article on How the Nazi’s Pink Triangle Symbol was Repurposed for Pride describes what life was like for gay men during the Holocaust, “From the few survivors and prison guards who have shared their stories, it’s been learned that those sent to concentration camps were segregated, for fear that their sexual preference was contagious. Many were castrated. Some were used as guinea pigs in various medical experiments to find a cure for typhus fever and a cure for homosexuality, the latter of which led the SS to inject them with testosterone to see if it would make them straight. At the same time, some Kapos (prisoners selected by the SS to keep fellow prisoners in line) are said to have demanded sexual favors from prisoners, who were known as doll boys, in exchange for extra food or protection from hard labor.”

Paragraph 175 wasn’t repealed until 1995, by which time the pink triangle was reclaimed as a symbol of pride.

How did Hirschfeld’s legacy carry forward?

Hirschfeld died in France on his 67th birthday, and would not live to see the law overturned. But, is legacy lives on in meaningful ways. In 2011 when the Federal Cabinet of Germany granted 10 million euros to establish the Magnus Hirschfeld National Foundation to support research and education about his life and work in addition to Nazi persecution of homosexuals, German LGBT culture and community, and ways to counteract prejudice against LGBT people.

To all the advocates, upstanders, and allies, may every day be a celebration of culture and pride. As Magnus Hirschfeld once said, “Soon the day will come when science will win victory over error, justice a victory over injustice, and human love a victory over human hatred and ignorance.”