UNCOVERING THE SECRET HISTORY: A Q+A with Avner Avraham 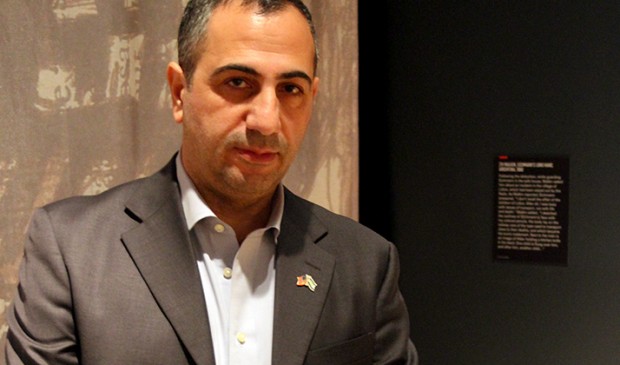 Career Mossad agent Avner Avraham curated the espionage artifacts featured in Operation Finale: The Capture & Trial of Adolf Eichmann. This is the first time the recently declassified Mossad materials have been seen outside of Israel. Avraham was in Cleveland for the debut of Operation Finale at the Maltz Museum and had shared his thoughts about the world premiere exhibition exploring the daring capture and historic trial of an escaped Nazi war criminal.

You put together artifacts from The Mossad’s archives relating to Eichmann’s capture. What compelled you to do that?
2011 was the 50th anniversary of the 1961 Eichmann trial, which was commemorated in Israel. That got me thinking— if it had been 50 years, we could start sharing some of the information. I began to find artifacts related to the operation, which you can now see at the Maltz Museum in the exhibition.

No one had an issue with you digging around in the archives?
It’s something I had done before. I was a communications officer at The Mossad and years before I found a lot of the original transmissions and communications devices that were used by the Haganah. I built a small exhibition around that.  Later I went to the university and studied to become a professional about exhibitions.

But I have always been a collector. I have a love of history and I put together exhibitions like agents put together operations. I collect a lot of artifacts, materials and information and I make important connections. I send a message out to all the important parties—in this case, the retired agents that were part of the Eichmann operation—to let them know what I am doing and what I am looking for. Then, I pull together more details from the information I receive. For example, a woman who had worked for The Mossad told me how she had acted as a secretary at the trial. When the judge was writing up the verdict, he needed someone who could type. Almost accidentally, she ended up playing a big role in this part of history. Other people bring me things—photos, clothing, letters—things they don’t know what to do with but they know were a part of something larger.

So your knowledge is always growing?
Yes. Researching the capture of Adolf Eichmann has become a very big part of my life. Every week I get emails from people all over the world who have new details or stories to share. I now have things like photos of the El Al crew going shopping in Argentina after they landed because they thought they were part of a regular flight. It’s amazing. I continue to discover new things about the Eichmann operation all the time.

It was a major, complex operation to carry out in a time when there weren’t computers, cell phones and digital cameras.
Yes, it seems almost primitive compared to espionage now. We’re talking about a time when a forging technique was to put a sliced potato on a passport to absorb the ink so you could use a knife to carefully carve out a passport stamp [from the imprint]. You see a number of artfully hand-forged IDs and license plates in Operation Finale.

By the way, here’s a piece of insider information: There’s a small diary in the exhibition that is open to the week of the capture. There are many little numbers scribbled on the page. People always ask me, “What are those? Are they code?” No. They are tracking when they refueled and how much they paid so they can get reimbursed. On a real operation you can’t take and save your receipts.

When you first began researching the archives, what did you find that was a revelation to you?
I found an envelope of passports and saw a photo of Eichmann on one of them. It was an Israeli passport with a blue cover and a picture of this Nazi war criminal. I immediately knew it was him. That had an effect on me. His name is listed on the passport as Ze’ev Zichroni. “Ze’ev” means “wolf.”

The exhibition in Cleveland encompasses your work, but it also includes new material. It’s a larger, more comprehensive exhibition. Talk about how it turned out.
Operation Finale is the biggest and most important exhibition I have been part of to-date. It’s a real collaboration of The Mossad, Beit Hatfutsot, the Maltz Museum and Gallagher & Associates. We all came together to create it and tell the complete story—from the Wannsee Conference to Eichmann’s trial and its legacy.

You probably didn’t imagine this would become a 4,000-square-foot multimedia exhibition traveling across America when you first gathered artifacts to put them on display at The Mossad, did you?
Well, my imagination is pretty big. I think this story could even become its own museum someday.

What about the tracking, capture and trial interests you so much? Why do you think it is an important story to share?
I think it is one of the most important stories of the Jewish people. I also see it as a new way to share the Holocaust story. We must learn from the Holocaust, especially as you see what is happening around the world today with bombs, international tensions and crimes against humanity. This exhibition illustrates what we are talking about when we say “never again.” That message is even more important as survivors turn 80 and 90 years old because they will not be able to tell their stories forever. And this exhibition includes Holocaust survivors who speak to people in Cleveland today. With 60 artifacts, 70 photographs and seven movies in the exhibition, Operation Finale tells the whole story and even some of the behind-the-scenes stories.