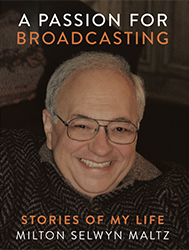 Milton Selwyn Maltz, successful broadcasting entrepreneur and noted philanthropist, is pleased to announce the publication of his memoir entitled “A Passion for Broadcasting: Stories of My Life.“ The 224-page volume recounts stories of the author’s childhood, education, military service, and ascent in the broadcast industry. Maltz also reveals the motivations that, with his wife of 70 years, Tamar, have fueled his philanthropic initiatives throughout the United States.

In this candid and captivating memoir, Milton Maltz delights us with stories that result in the creation of New York’s Z100, working with Barry Diller to save the FOX Network, fighting for The Rock and Roll Hall of Fame to be located in Cleveland, combating hate by hiring Virginia Foye, the first black woman news anchor of a major TV station, and many others.

We discover how Maltz’s curiosity, uniquely creative problem solving and street smarts propelled the growth of his company, Malrite, which he founded in 1956 by purchasing a failing daytime station in Plymouth, Wisconsin. Maltz eventually owned and managed 31 radio and television properties from coast to coast and Puerto Rico.  We learn details of how he sold Malrite’s radio division to the Walt Disney Company in 1993 and its TV holdings to Raycom Media in 1998.

The memoir explains how and why Maltz’s success nourished his philanthropy. He offers details about the founding of such groundbreaking projects as the International Spy Museum in Washington, D.C., the Maltz Jupiter Theater in Florida, the Maltz Research Laboratories in Baltimore, and is a board member of the worldwide Brain & Behavior Research Foundation in New York. In Cleveland, his philanthropic initiatives include creating the Maltz Performing Arts Center, the Maltz Museum of Jewish Heritage, and many others.

To purchase this book visit the Maltz Museum store. Open during regular museum hours, admission not required to visit the museum store. All proceeds go to the Museum to fund education.